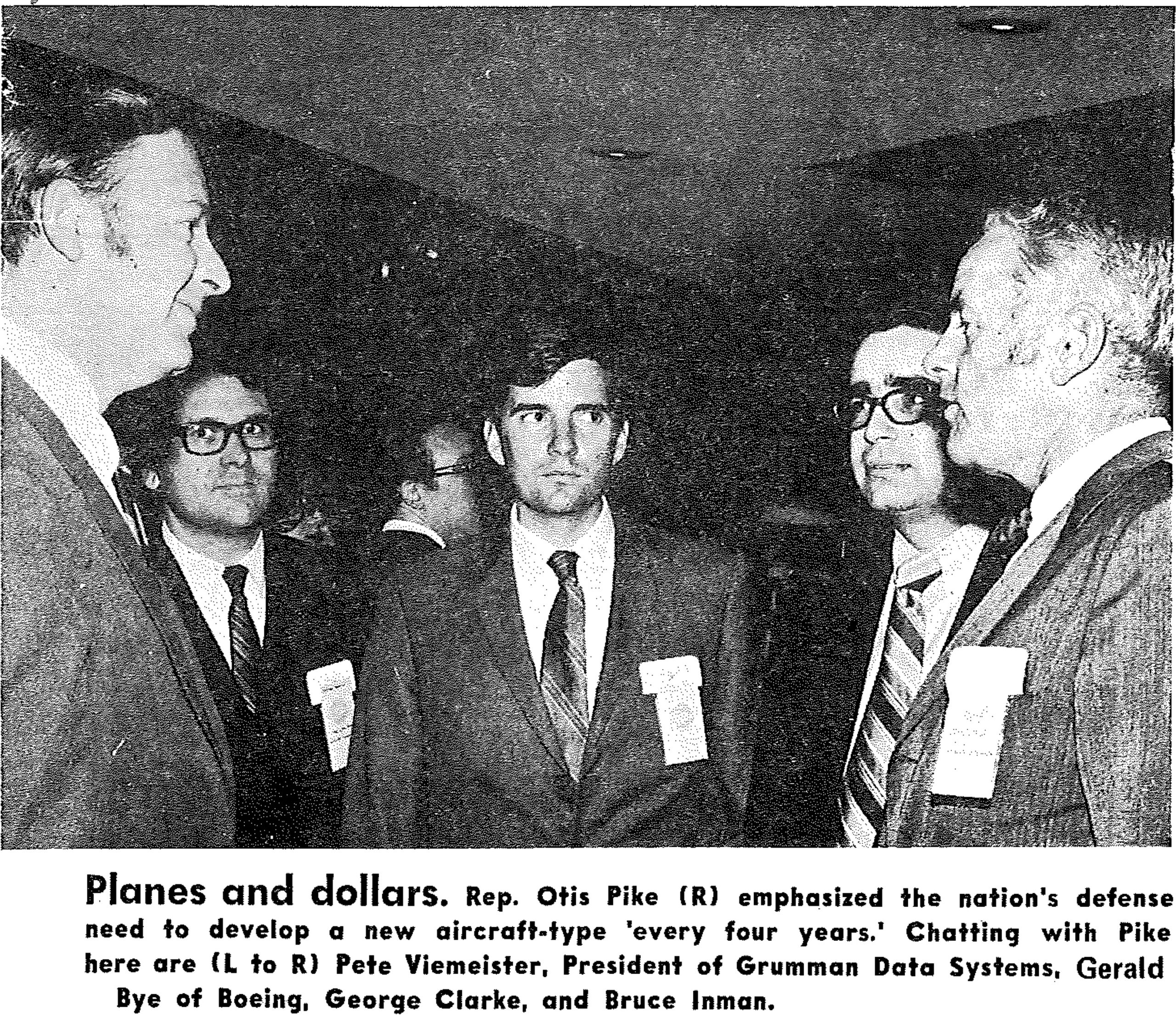 All was not business at the Second Annual Symposium. Monday evening to get “fortified” for the Business Meeting, members unwound from the day’s activities at a cocktail hour allowing many old flight test acquaintances to be renewed. Needless to say all were prepared for the business of the night.

However, the highlight of the Symposium was the gala cocktail hour and banquet held on Tuesday evening. Participants, attendees, local members and the local flight test community as well as many wives enjoyed the cocktail hour hosted by Grumman Data Systems and a fine meal. Total number in attendance was 180. Again more old friends were found. Dignitaries from local industry as Fairchild Hiller, Grumman Aerospace and Grumman Date Systems were represented at corporate tables. Mr. George Toumanouf, Director-Transportation Systems Div. AIL served as toastmaster and set everyone at ease with his wit and flight test related introducing remarks.

Bruce Inman spoke about his past year as president and introduced the newly elected president for 1971 George Clarke. George discussed plans, hopes and goals for the Society in 1971. George presented Bruce with a certificate from the membership in appreciation for his contributions to the Society as founder and first national president. The featured speaker for the evening was Representative Otis G. Pike, Long Island, a member of the House Armed Services Committee.

Rep. Pike led off with some humorous introductory comments, then settled down to some serious observations on the state of the aerospace industry.

There was a surprise, for example, as Representative Pike said: “Long Island is getting its fair share of over-all defense spending.” And he went on to say that New York State has advanced to second place in terms of dollars flowing in. Texas, which has been second, is now running third.

A staunch defender of air power and knowledgeable about the multiple uses of aircraft, partly because of his membership on the House Armed Services Committee, Pike made a brief but powerful pitch on the necessity for balance and the continual updating of the nation’s air arm. On the question of balance, Pike pointed out that, historically, one particular phase of national air defense has been over-accentuated, naturally to the detriment of the other; for example, there was a “massive retaliation” phase, a “strategic nuclear force” phase, and so on. To Pike, this distorts the picture of national needs.

On updating and building new aircraft, Pike believes that “we should make a commitment to design an aircraft every four years. That would keep us apace of technology and ahead of a threat by a potential enemy.” This must be a firm pledge, he said, one that the public must be made aware of; and that means that people in the aircraft industry have a communications job to do.

One thought on “Representative Pike Speaks at Banquet”