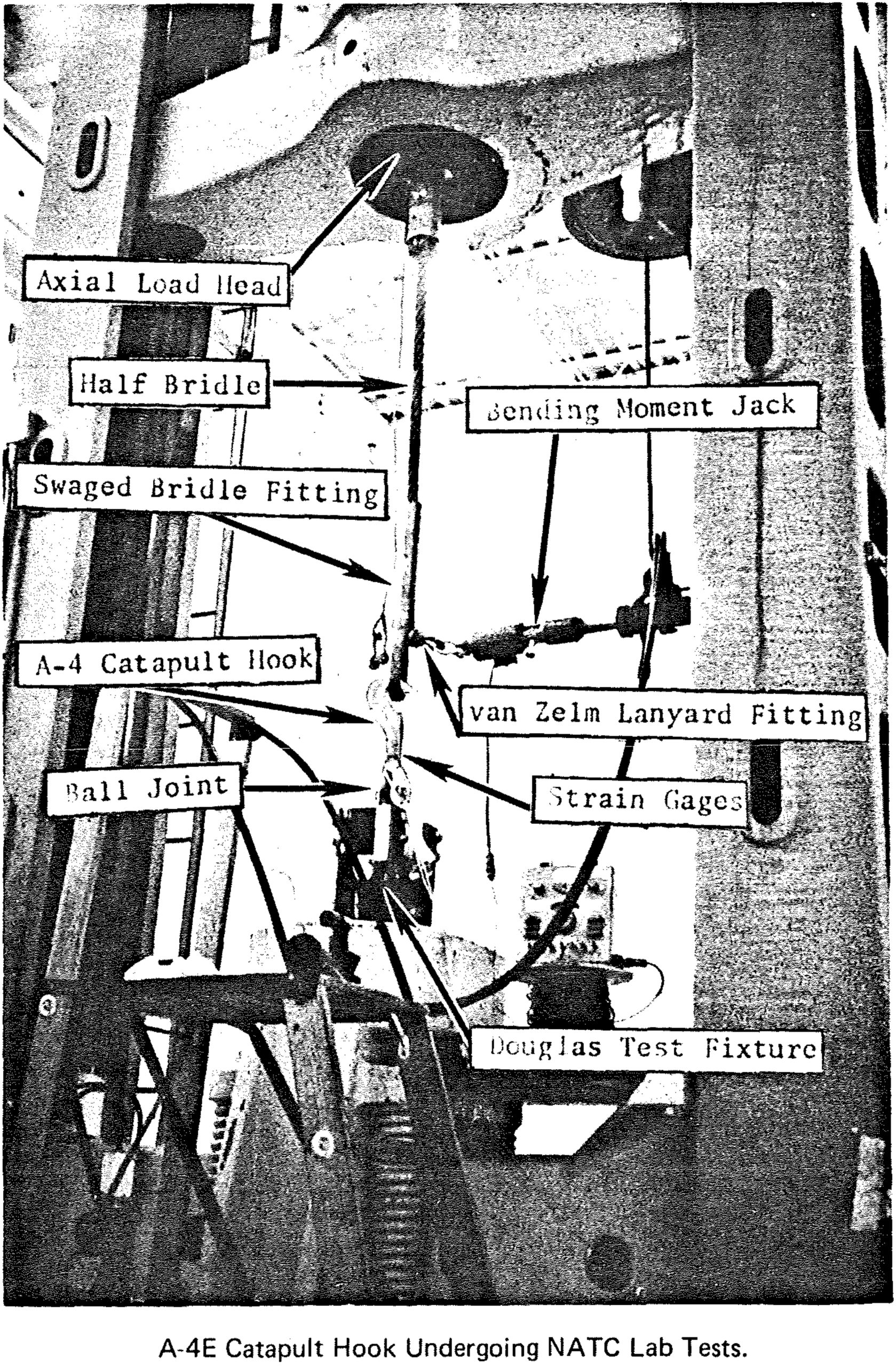 Recent operational experience in the U. S. Navy has evidenced a potential problem with the catapult hooks on the A-4 Skyhawk. The catapult hooks, which are underwing mounted, link the aircraft to the shipboard steam catapult through a removable cable called a bridle. Losses of three or more aircraft are thought attributable to catapult hook breakage.

In the course of qualification testing of components, the McDonnell-Douglas Company have demonstrated and cleared the catapult hooks and fittings to a life of 1200 launches in lab testing. Typically, a launch was considered to be one cycle of combined 80,000 lb axial load and 18,000 in-lb torque about the axial load axis. The torque load simulated the load caused’ by “unlaying” of the bridle. The fact that fleet failures had an average life of 600 launches implied that the lab tests did not adequately reproduce the service loadings.

The Naval Air Test Center was requested to instrument an A-4 aircraft and measure the actual launch loads on the catapult hooks. These tests were to be conducted on the shore-based TC-7 steam catapult at Patuxent River Maryland. The catapult hooks were instrumented with strain gages to measure axial load, torsion about the main axis, and vertical and lateral bending in the hook shank. The aircraft was also instrumented to measure longitudinal acceleration. The hooks were lab calibrated and interaction relations determined.

The flight test program with the instrumented hooks was structured to provide a wide range of launch endspeeds and aircraft gross weights in hopes of determining the effect of both of these factors. In addition, it was planned to position the aircraft on the catapult off-center to the left and right up to 10 inches as well as on-center.

As the test program progressed, several items of note appeared. There was a distinct oscillatory vertical bending moment occurring during the launch with a frequency of approximately 2-3 Hz. This was particularly unexpected since the hook is mounted on a spherical bearing and the moments were occurring without the hook contacting its restraining stops. A second and important phenomena was a very rapid high amplitude vertical bending moment occurring within 0.02 seconds of the end of the catapult power stroke. This spike was traced to the application of the Van Zelm bridle arrester. The magnitude was also found to be a function of aircraft endspeed and point of application of the Van Zelm bridle arrester. The magnitude of this bending moment, up to 32,000 in-lb at the spherical joint, was sufficiently large to have a significant effect on the hook fatigue life. It was also found that the maximum axial load of 80,000 lb was very difficult to reach and that the 18,000 in-lb “unlaying” torque was approximately double the measured values.

In an effort to learn more about the loads imposed on the A-4 catapult hook, NATC conducted further laboratory tests to define the loading mechanisms and verify the strength of the hook in bending.

The tests were conducted on an A-4E catapult hook that was restrained by a representative wing fitting with ball joint. The wing fitting was held in a Douglas fixture which simplified attachment to the loading machine. The axial load was applied to the hook by a typical bridle fitting swagged on a 5 foot length of cable. The freedom afforded by the ball joint, cable, and fitting allowed the system to align itself properly short of the hook hitting its stops. Vertical bending moments were introduced by applying normal loads to the bridle fitting at the Van Zelm lanyard shackle with a hydraulic jack.

The catapult hook was instrumented with strain gages to measure axial load and vertical bending moment at one station only. The axial gages were calibrated in the Southwark Emery tension machine to 80,000 lb. The vertical bending gages were dead weight calibrated to 7,000 in-lb. This calibration limit was used because of weight basket limitations. Since the calibration was linear, up and down loading, extrapolation was used where required.

In another series of loadings, the axial load was maintained at some nominal value while the vertical bending load was increased until the hook was just short of contacting the fitting.

It is thought that the bending moments during mid-stroke are caused by the introduction of a concentrated moment at the juncture of the bridle fitting and catapult hook. The concentrated moment is the result of a change in aircraft attitude during the catapult stroke and the inability of the bridle fitting to rotate in the hook throat due to the extremely high Hertzian stresses at the juncture. This moment is balanced by the cable tension and a slight change in the elevation of the catapult hook above or below the original equilibrium position. The effect of the mid-stroke bending moment is thought to be of limited significance.

In the actual catapult tests, bending moments of 18,000 in-lbs were recorded during the final phase of the launch. One source of conjecture on the validity of this data concerned the strength of the hook in bending. In an effort to validate this data, the hook was loaded in the laboratory to bending moments of 18,000 in-lb. with combined axial loads of 5,000 and 10,000 lb. At the completion of the tests, there was no observed deformation or other damage to the hook or fitting. The required lanyard load to produce the 18,000 in-lbs bending moment varied from 5,000 to 7,000 lbs. When considered with the lanyard geometry on the actual installation, the loads are in good agreement with catapult data. This test series verified the strength of the hook to withstand the loads measured on the catapult. On this basis, it appears that test conditions of 18,000 in-lbs with axial loads of 10,000 lbs or less are realistic.

The high bending moments encountered at the end of the power stroke were found to be directly related to the Van Zelm brake application point. The earlier the brake was applied, the higher bending moment. It became clear that with early brake application, there was still a significant bridle load from the catapult shuttle on the hook and that the bridle and bridle arrester lanyard combined to give a very high net down load on the hook. This down load was sufficient to force the hook rapidly against its down stops. The resulting impact load as the hook hit its stops aggravated the peak bending moment considerably. The instrumentation showed that there was sufficient energy stored in the hook from bending after impact, that after the bridle was shed from the hook at the end of the power stroke, the hook rebounded alternately against its upper and lower stops as many as six times. While this number is not significant in itself, it is indicative of the abuse to which the hook was being subjected. A direct result of this finding has been a program to more application point of the Van Zelm bridle arrester to keep this point as late as possible without excessive runout of the bridle arrester after the power stroke. This work on the Van Zelm brake is still in progress at NATC, Patuxent River, Maryland.

As another result of the flight and laboratory tests at NATC, McDonnell-Douglas has been contracted to conduct further tests on the A-4 series catapult hooks. These new tests, expected to begin in Spring, 1972, will now include bending moments up to 18,000 in-lbs measured at the midpoint of the shank along with combined axial load and torsion. These tests, part of the Service Life Extension Program (SLEP), should help to extend the carrier operational life of the A-4 Skyhawk with a high degree of confidence in the “advertised” fatigue life.