This article first appeared in the March 2018 Flight Test News.

I took advantage of my flight home from the 28th SFTE European Chapter conference in Milan to read the papers which colleagues of ours had presented at the 1980 annual symposium in Atlanta, Georgia. I wasn’t sure what to expect from the title, “Flight Testing in the Eighties”, but I was confident it couldn’t possibly cover the same range of activities which we’d learnt about in Italy, where speakers had talked about gyrocopters and fast jets and everything between, from ground level up to FL500 and beyond. How wrong I was! 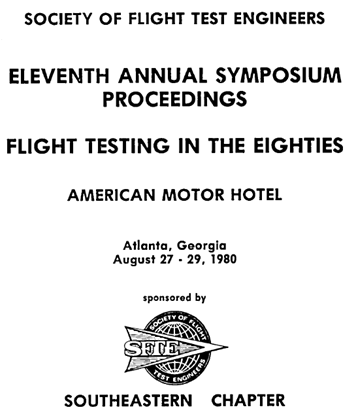 If you were present in Atlanta in 1980, you would have felt the impacts of the 1970s oil crisis with several papers talking about fuel efficiency becoming a driving factor in the GA market and even in the way the US Army organised test campaign logistics.

You would have never heard of global warming, indeed a new ice age seemed to be occurring with icing testing being a major concern for several speakers (2017 Milan delegates heard about the CH47-C HISS just like 1980 Atlanta delegates did!). You would have learnt about the exciting possibilities for instrumentation and telemetry offered by digital technologies in their earliest throes – one speaker proudly boasted about the 4000 bytes of memory his system could offer.

But more than anything else you would have marveled at the amazing range of test vehicles that FTEs were lucky enough to play with, across an astonishing range of flight envelopes: 1/3 scale models of sailplanes, cruise missiles, helicopters, jet-wing STOL aircraft, fast jets, GA models, and although it wasn’t presented at the symposium, even a certain Space Shuttle was in the middle of its test campaign with the first orbital flight occurring in 1981.

I think we all recognise the good luck we have to work in such an inspiring area, but you can’t help feeling just a little bit jealous of our 1980s colleagues, can you?

This article first appeared in the March 2018 Flight Test News.

One thought on “Hindsight: Looking Back at 1980”