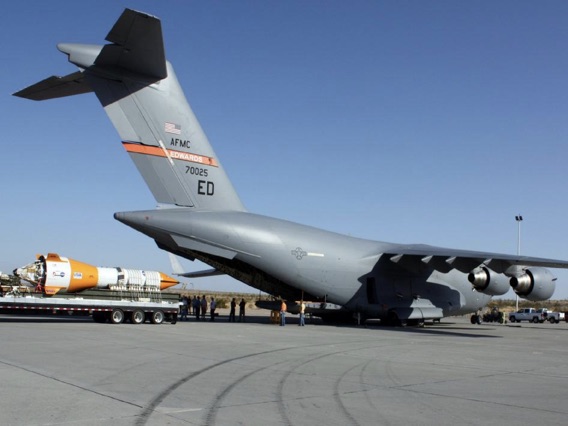 Embedded deep in the lore and legend of flight test is a uniquely colored fiber woven into the fabric of who we are and what we do.  The color of that fiber is flight test orange. It appears on our patches and in our logos, but it also shows up in our aircraft, as flight test instrumentation, orange wire, and emergency equipment.

The origin of this color tradition is largely unknown, but a widely known, early example is the Bell X-1.  Anecdotal evidence suggests that engineers painted the X-1 its bright orange color to enhance its discernibility.  From a purely theoretical standpoint, orange is the color that contrasts most vividly with sky blue, but empirical results did not match the theory. Later paint schemes included color/patterns that provided contrast on the aircraft itself. For example, early on, NASA used orange in the unmanned X-9 paint scheme, including black and white contrast with “day-glo orange” around the national insignia, as described in Monograph 31, American X-Vehicles.

The continued evolution of the actual paint schemes is not clear, but evidence of the use of standardized orange also dates back to the World War II time-frame.  In that era, the War Department issued a color standard, known as FS-595, to assist vendors in meeting paint requirements for the booming aviation industry. “The Federal Standard color system provides a means of comparing colors visually. It has its origin in the US Military complex and is still used there as the primary source of color reference… The widespread application of the standard in the military is the reason for the prevalence of the FS-595B despite its apparent obsolescence as compared to more modern color designation systems.  FS-595B has also become a de-facto standard in many non-military applications such as historical color research or the modeling industry worldwide” (FED-STD-595, http://www.colorserver.net/history/history-description-of-tt-c-595-josa.htm, Sep 25, 2015). In the documentation for the standard we find Aviation Surface Orange as No. 1205, a color previously denoted Army-Navy Aircraft Standard 508.

A multitude of orange shades also appear inside the aircraft on which we fly even today. A host of orange wires run every which two and from orange boxes inside and outside our aircraft. Flight test equipment installations historically use this orange wire, hardware, and markings, but the earliest appearance of this practice is unknown.

Finally, bright orange flight suits are also a common sight, but the emergence of this fashion statement is also of unknown origin. Though we can easily its purpose as a method to assist in finding aircrew members wherever their aircraft inadvertently land or unfortunately crash.

In the anecdotes above we find several curious links with the month of October. In the milder parts of the Northern Hemisphere, October brings with it a color palette based largely in orange, as autumn paints the trees and the setting sun casts its hues on the early evening skies. The color permeates almost everything we do, as hot drinks turns orange and the scent of pumpkin spice fills the air. October also brings its companion, Halloween, a holiday which brings a wide array of ghoulish costumes, jack-o-lanterns, and orange-and-black-themed decorations filling store shelves. The makeover that the occasion brings may only remain for a short season, but in the world of flight test, the Frankenstein-like contraptions last year round in our flying test beds, prototypes, and other experimental aircraft.

Finally, October is the month that Chuck Yeager broke the sound barrier in an orange colored rocket aircraft, the X-1. As I close my observations about orange, I would like to raise one small line of questions. History tells us that Yeager made his flight with a broken rib, and he used a broom handle to close the door of the aircraft that he, otherwise, would not have been able to close. Is this anecdote evidence of virtue or vice? Did he accept risk he should have avoided? Did the people on the test team have processes which promoted a safety culture?

It worth’s pondering while you sip you pumpkin spice.

One thought on “flight test orange”