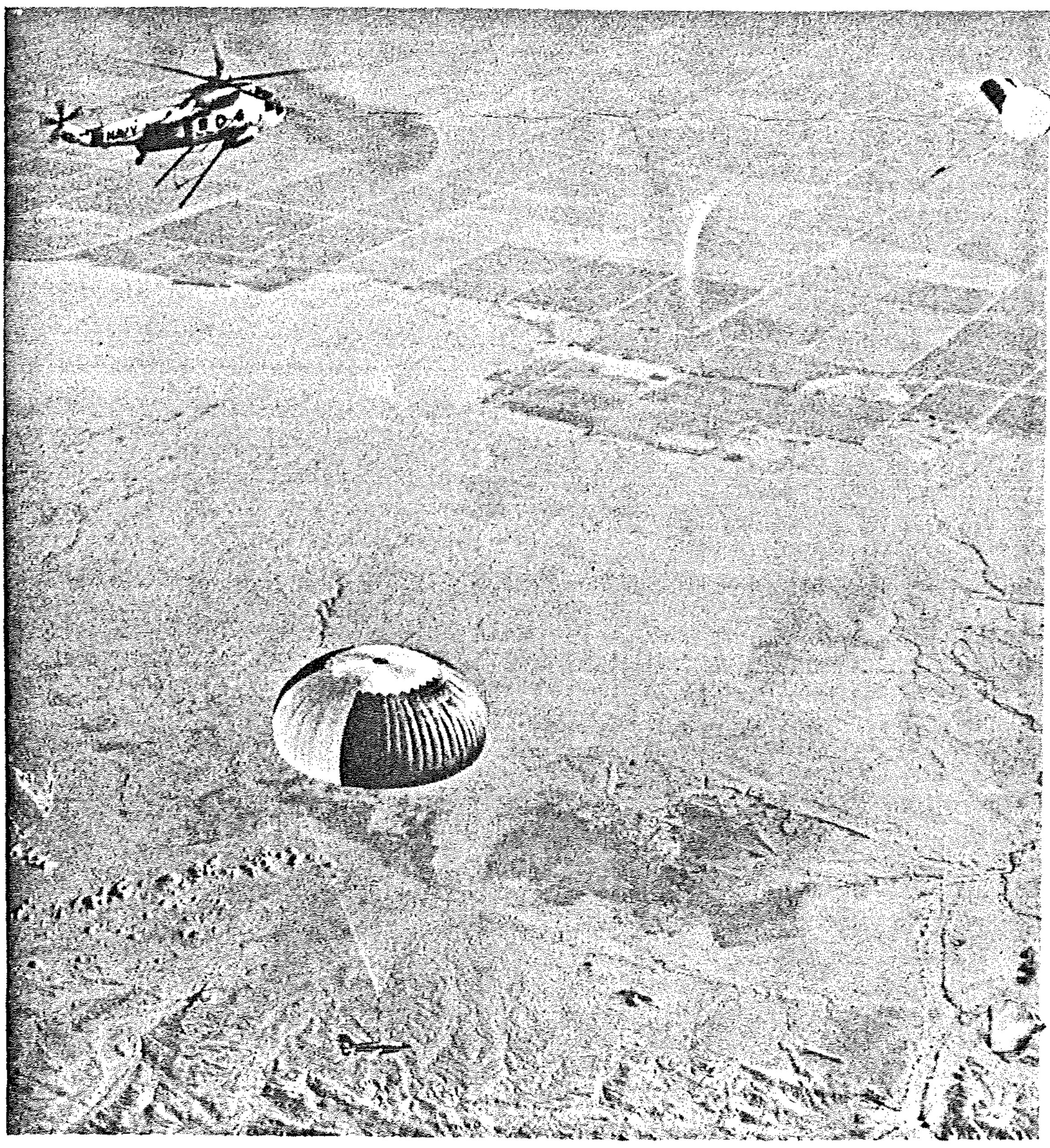 This article first appeared in the April 1971 Flight Test News.

The MARS concept will enable the Navy to retrieve valuable airborne payloads prior to ground impact and subsequent damage. Initial use of the Navy’s MARS is for recovery of target drones at the Naval Missile Center, Pt. Mugu, California. The drones deploy a main parachute at the end of the mission run and descend to earth. In the past the drones have incurred costly damage due to ground impact and salt water contamination when descending over the sea. Considerable savings in time and money will be realized by retrieving the drones with the MARS and flying them directly to the launch area in a condition for immediate re-use.

Both the helicopter and the payload have to be modified with MARS equipment. As shown in the photograph, the payload descends on two parachutes. The larger main parachute arrests the rate of descent while the smaller chute flying above the main is the engagement chute, to be snagged by the MARS equipment aboard the helicopter. A 350 ft load line connects the payload to the engagement chute via a release mechanism that disengages the main canopy when sufficient tension is applied to the load line by the retrieving helicopter.

The MARS helicopter incorporates a rope loop assembly with three strategically located hooks which are spread between two externally mounted poles that can be lowered hydraulically below the helicopter. The loop assembly is connected to an energy absorbing winch inside the helicopter by means of a cable running through the underside of the helicopter and over sheaves at a point close to the aircraft center of gravity (CG).

In effecting a mid-air recovery, the pilot maneuvers the aircraft over the engagement chute and snags the chute with one or more hooks. The loop assembly and hooks then pull away from the poles and cables is payed out until the pre-set brakes on the winch bring the cable to a gradual stop. Thus, a gradual acceleration is applied to the payload in the direction of flight. The payload is then reeled in to a stowed position 30ft below the helicopter until it is finally landed and released.

A white “aiming gore” in the otherwise orange colored main chute indicates to the pilot the proper direction in which to ap· proach the engagement chute. This prevents the load line from being pulled through the main chute and burned, with eventual loss of the payload. Airspeed for the recovery
is 55 kt (±5) while descending relative to the payload system at 1,000 to 1,200 ft. A maximum normal acceleration of 2g is normally applied to the payload during the recovery. The possibility of exceeding the helicopter maximum allowable gross weight of 19,100 lbs with the aircraft and payload weight combination can be averted prior to the catch with the 900 lb/min fuel dump capability of the MARS SH-3A helicopter.

During the four week evaluation, the Patuxent River team evaluated stability and control, performance, structural integrity, and equipment suitability of the SH-3A helicopter. The test aircraft was equipped with two 36 channel oscillographs and a photopanel for recording the extensive list of flying qualities, performance, and structural parameters. Ground to air, air to air, and on-board camera coverage was used and proved invaluable in analyzing some of the mid-air recovery problems, particularly tail rotor clearance and engagement chute stability. Due to an inherent aft CG condition in the MARS configuration, tail rotor clearance was of concern. The stability of the engagement chute was variable with each successful recovery and proved to be a problem for the pilot during his approach. This instability partly accounted for an accident that damaged the right landing gear sponson and terminated the evaluation prior to its last two scheduled recoveries. Within the last few seconds during the approach, the engagement chute rose a few feet, snagged the sponson, until the chute, loadline and dummy drone were possibly cut away by the jagged metal of the damaged sponson.

Pending further airframe modification to the landing gear sponsons to preclude recurrence of engagement chute hang-ups, the aircraft will be considered acceptable for service use. Future uses of the Navy MARS may include retrieval of space exploratory systems, weather data recording packages, etc.

This article first appeared in the April 1971 Flight Test News.