This article first appeared in the April 2016 Flight Test News.

There I was, at my desk, keeping my head down. They came to me, “Sir, can you fly today?”

“Today’s test mission is not routine and the authorities want a designated representative on the flight. “

“You mean a Flight Analyst DER?”

“Ok.” Three hours later I’m in the jet, in the back. I hate the back. Too luxurious – I wasn’t built for that.  I’ll fly up front at the drop of a hat. I’ve scrambled to the back after takeoff to change the center of gravity and stress the jet, but never before have I launched from the back of a company flight test article.  Mission planners said they needed two guys up front too. We don’t often test with three of us, so this must’ve been important. Yeah, it was. Even with all the urgencies, every person in every department straining & pushing for certification, I’d be straining more. My assignment was the company’s number two priority.

Ninety minutes into it, we were at FL430 and cold-soaked, to the bone.  Standard temperature up there is 57 degrees…below zero. I’m pretty sure this was colder, but that was a good thing.  We wanted to test the most critical condition. Better that we test it first than a customer. The chauffeurs had it good. Normally revered as test pilots, this time they were chauffeurs. It was an analyst gig this time.  Not wanting to kneel at the cockpit and not having a jump seat to occupy during the cruise cold soak, I assumed executive authority and stayed in back.  Without a headset in the cabin, it felt like being back in the USAF, flying NORDO. But it felt luxurious.

Finally, we hit the mission’s target parameters and the guys up front gave the “All clear.”  In return, they needed a signal to know when to watch their screens and transmissions for signs of electromagnetic interference (EMI).  EMI is sneaky, known to bite amateurs in the you-know-what. Again, better our guys up front than customers. That would piss them off and leave us with our pants down.  It was show time. Squeeze past the instrumentation rack to the way back, steady the camera with one hand, ready the other hand to trip the sensor, and signal the crew with a third hand.  Crap, that’s not going to work. Replan! Got it – go Navy and call the ball – a shouting verbal countdown it is… “Three…Two…One… GO!”

Did it work? Yes, we have drainage. Move to the next duty to discharge. Dump my load and call it. “Three… Two… One… Evacuate! GO! GO! GO!”

It worked.  Everything worked. Hooya! But wait, there’s more. The feds want another demo eight thousand feet lower.  Squeeze forward to the cabin, sit, and recharge. Get the chauffeurs’ clear signal, squeeze out another round to the way back, poop out more video, another countdown, another good test.

They wanted a third. Not wanting to pinch through again just to sit in the executive section, I just grabbed a stool and stayed put for the third performance. It was already getting old. At 1800 hours on 4/1/15, video recording was finally done, or as Hollywood-types say, it was in the can.  The man-machine interface, so to speak, worked like a charm. I was totally petered out with my face flushed, but I’d have to admit it was rewarding in the end: this was my number two career highlight as an analyst. Now I need a walk-out song…something from a famous scat singer. 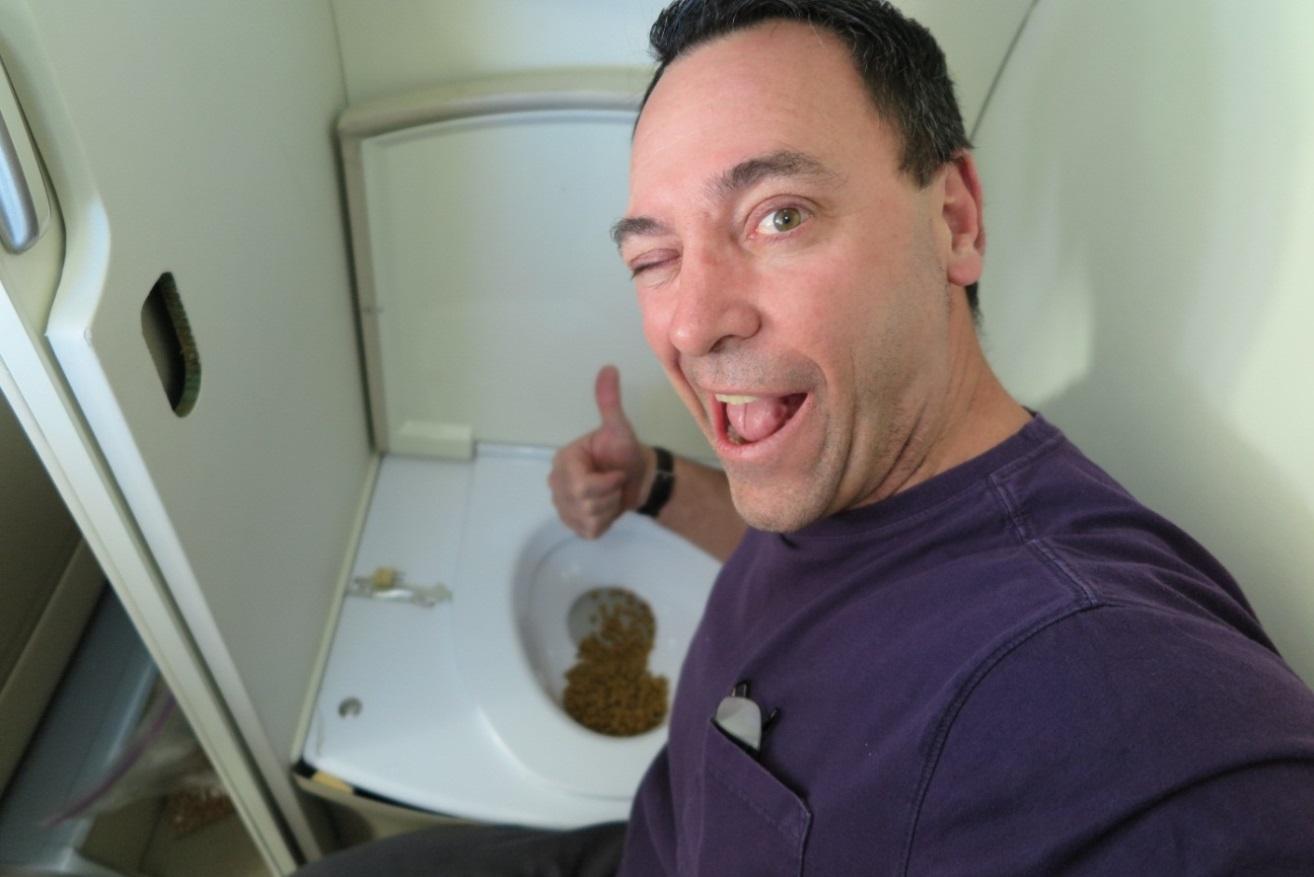 Thanks to Al Lawless for sharing this lighthearted but true report. Sometimes truth is stranger than fiction.

This article first appeared in the April 2016 Flight Test News.

One thought on “Flight Report: Call of Duty”